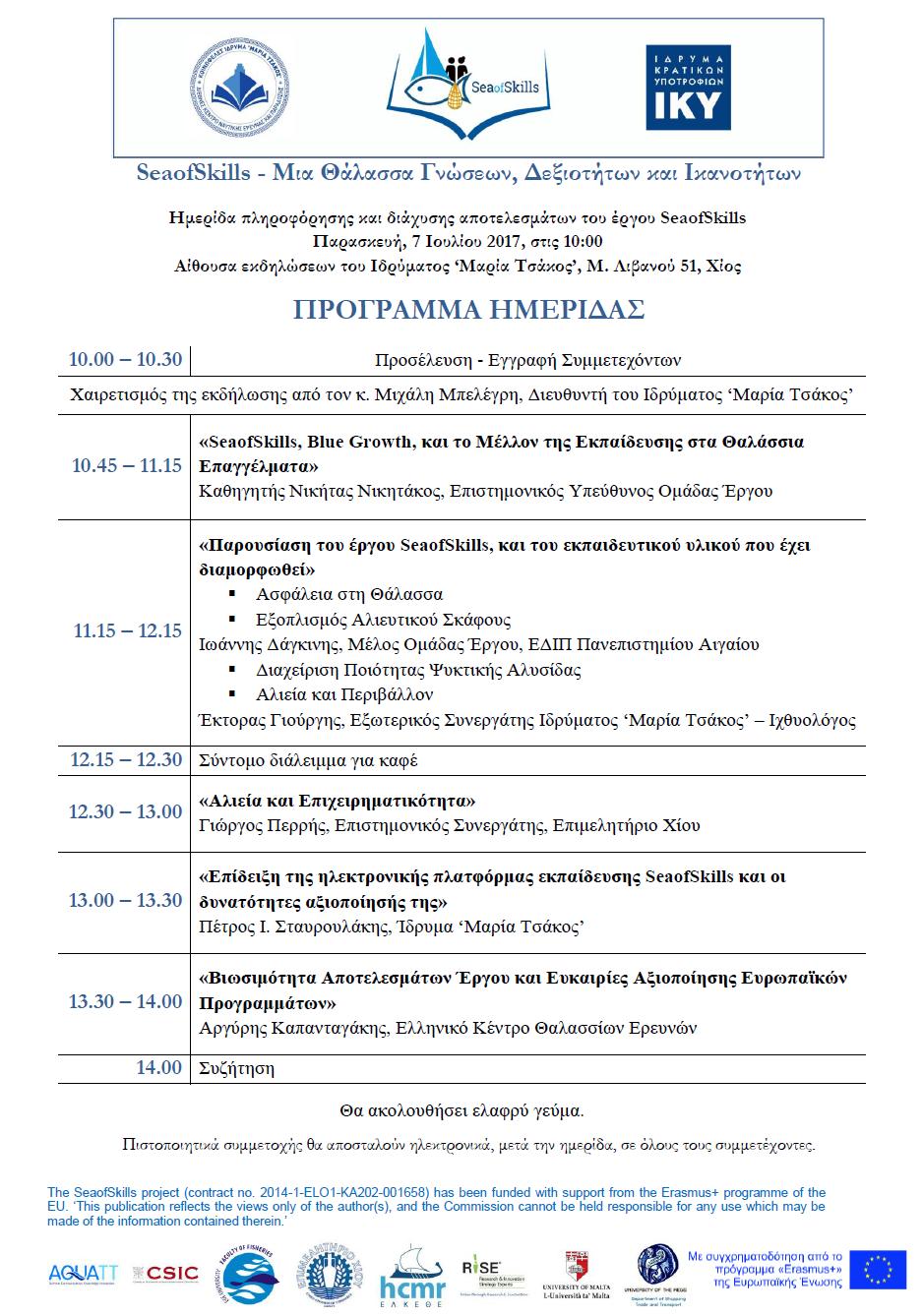 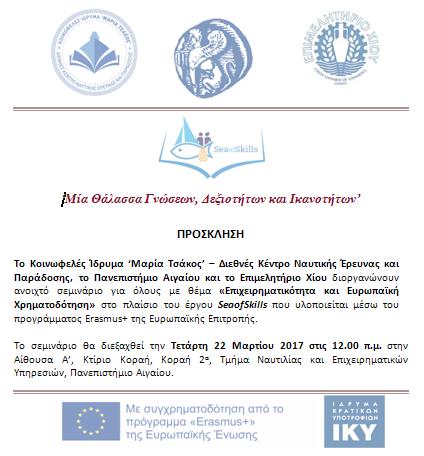 On Saturday, 11th March 2017, a one-day multiplier event took place at our Foundation’s premises in Chios within the framework of the EU funded project “SeaofSkills” (Erasmus+ Programme), which is co-ordinated by the ‘Maria Tsakos’ Public Benefit Foundation and aims at the reinforcement of the small-scale coastal fisheries sector through vocational education and training.

Among the attendees were fishers, representatives of the competent public authorities, vocational education and training providers, students and citizens interested in the modules: Safety at sea, Equipment used on fishing vessels, Cold chain quality management, Fisheries and Environment, Entrepreneurship.

For more information on the project ‘SeaofSkills’, which is implemented within the framework of the Erasmus+ Programme of the European Union, you may visit the website: http://seaofskills.eu/. 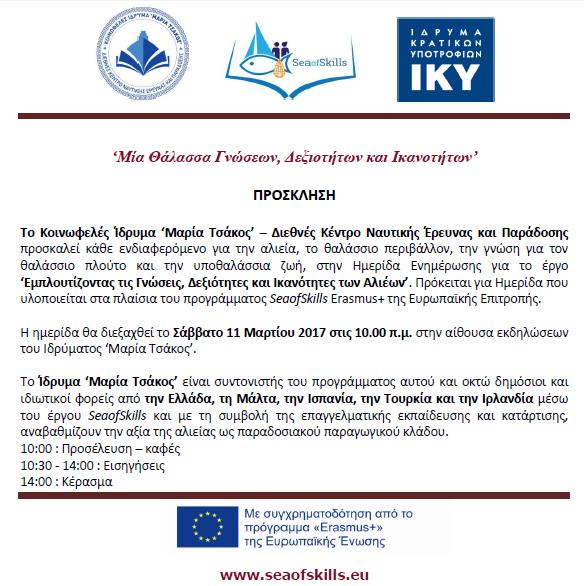 The “Maria Tsakos” Foundation-International Center of Maritime Research and Tradition and DNV GL have embarked on a joint venture to cooperate on the maritime transportation domain, with particular emphasis on maritime education, research and environmental protection.

A signing ceremony to commemorate the agreement between the two partners was held at the Foundation’s headquarters in Chios on 27 September 2014. DNV C.E.O. of Maritime Tor Svensen, and “Maria Tsakos” Foundation Chairman and IMO Secretary- General Emeritus Efthymios Mitropoulos signed a Memorandum of Understanding on behalf of their respective organizations. They were joined by a number of distinguished guests, including Captain Panagiotis Tsakos, founder of the Foundation, the President and C.E.O. of the DNV GL Group Mr. Henrik O. Madsen, the Ambassador of Norway in Greece, H.E. Sjur Larsen, the Ambassador of the Republic of Korea in Greece, H.E. Gil Sou Shin, the DNV GL Regional Manager of Eastern Mediterranean, Black and Caspian Seas, Mr. Nikolaos Boussounis and the DNV GL Manager for Greece and Cyprus, Mr. Andreas Pagalos, Professor E. Thanopoulou, students of the Aegean University, Mr Manolis Koukoulis Director of “Maria’s House” boarding school with boarders and Tsakos Group Seafarers.

The Chios-based “Maria Tsakos” Foundation – International Center of Maritime Research and Tradition, was founded in 2008 by the family of Captain Panagiotis N. Tsakos. Since its establishment, the Foundation has grown to become one of the leading maritime NGOs in Greece relentlessly working to support the maritime industry and seafarers.

As a result of the MoU signing, the two Parties will share complementary mission elements in a wide range of mutual interest areas, with key overlapping elements including, but not limited to, maritime research, safety at sea, seafarers’ welfare and the protection and preservation of the environment – both marine and atmospheric.

Captain P. Tsakos warmly welcomed the DNV GL delegation to the meeting, stressing that the signing of the MoU honours the Foundation and expressing the wish for a long co-operation to the benefit of shipping and the wide objectives the two partners aim to achieve.

Speaking on the occasion, DNV GL Group’s President and C.E.O. Mr. Madsen highlighted: “It is a great honour for us to work together with the “Maria Tsakos” Foundation to promote safer shipping and better conditions for seafarers and the environment.”

This sentiment was echoed by Chairman Efthymios Mitropoulos, who thanked DNV GL for its contribution to safety and environmental protection and stressed that he was looking forward to working closely with it to mutual benefit.

The “Maria Tsakos” Foundation-International Center for Maritime Research and Tradition and ClassNK have embarked on a joint venture of cooperation on matters of common interest, with emphasis on maritime research and environmental protection.

A signing ceremony to commemorate the agreement between the two partners was held at the Foundation’s headquarters in Athens on 29 November 2013. ClassNK Chairman and President Noboru Ueda, and “Maria Tsakos” Foundation Chairman and IMO Secretary-General Emeritus Efthymios Mitropoulos signed a Memorandum of Understanding on behalf of their respective organizations. They were joined by a number of distinguished guests including Captain Panagiotis Tsakos, Founder of the Tsakos Group of Companies, Mr. V. Papageorgiou, Vice President of the Group and Dr. S. Krimizis, Chairman of the Foundation’s Scientific Council, among others.

The Chios-based “Maria Tsakos” Foundation-International Center for Maritime Research and Tradition, was founded in 2008 by the family of Captain Panagiotis N. Tsakos, one of Greece’s most renowned shipowning companies. Since its founding, the Foundation has grown to become one of the leading maritime NGOs and philanthropic organizations in Greece, and is known internationally for its relentless efforts in support of the maritime industry and seafarers.

ClassNK is one of the world’s leading classification societies, providing safety and certification services for more than 8,500 vessels representing more than 20% of the world’s merchant fleet in terms of tonnage. The society is supporting the new study as part of its Joint R&D for Industry program, which has provided funding and research support for more than 250 joint maritime R&D projects since its inception in 2009.

The first project under the co-operation scheme is a research study to improve seafarer health and welfare, largely financed by ClassNK.

The objective of the Project (code-named S.H.I.P.S., i.e., Study on the Health Impact of air-Pollution in Ships) is to assess levels of exposure to ambient particles to establish whether they constitute a health hazard for ship crews, especially those working in the engine rooms, and to quantify any associated potential health risks

As part of the study, environmental fixed measurements and personal measurements are taken on-board 3 liquid cargo ships, 3 dry bulk cargo ships and 3 containerships. The project has two phases. First, a pilot study is underway to determine whether ambient air measurements of Particulate Matter (PM), Volatile Organic Compounds (VOCs), and Polycyclic Aromatic Hydrocarbons (PAHs), reach health hazardous levels. If that is the case, a second phase will determine specification and quantification of the associated health risks.

It is expected that the research, the first phase of which is expected to be completed by end of 2014, will provide a greater understanding of the potential health risks posed by air pollution in engine rooms and help better ensure the safety of seafarers.

The Founder, Captain P. Tsakos warmly welcomed the Japanese delegation to the meeting and expressed his delight for the co-operation hammered out and his wish for a close and strong co-operation for many years to come to the benefit of shipping and the seafarers.

Speaking on the occasion, ClassNK Chairman and President Ueda highlighted the importance of the Maria Tsakos Foundation’s work saying: “It is a great honor to be able to work together with one of the world’s leading maritime NGO’s to promote safer shipping and better conditions for seafarers. It is our hope that this project is only the first of many such collaborations to ensure a better future for our industry.

This sentiment was echoed by Chairman Efthymios Mitropoulos, who thanked ClassNK for its contribution to safety and environmental protection and stressed that he was looking forward to working closely with ClassNK in the future.

The “Maria Tsakos” Foundation–International Center for Maritime Research and Tradition

Photos from the signing ceremony